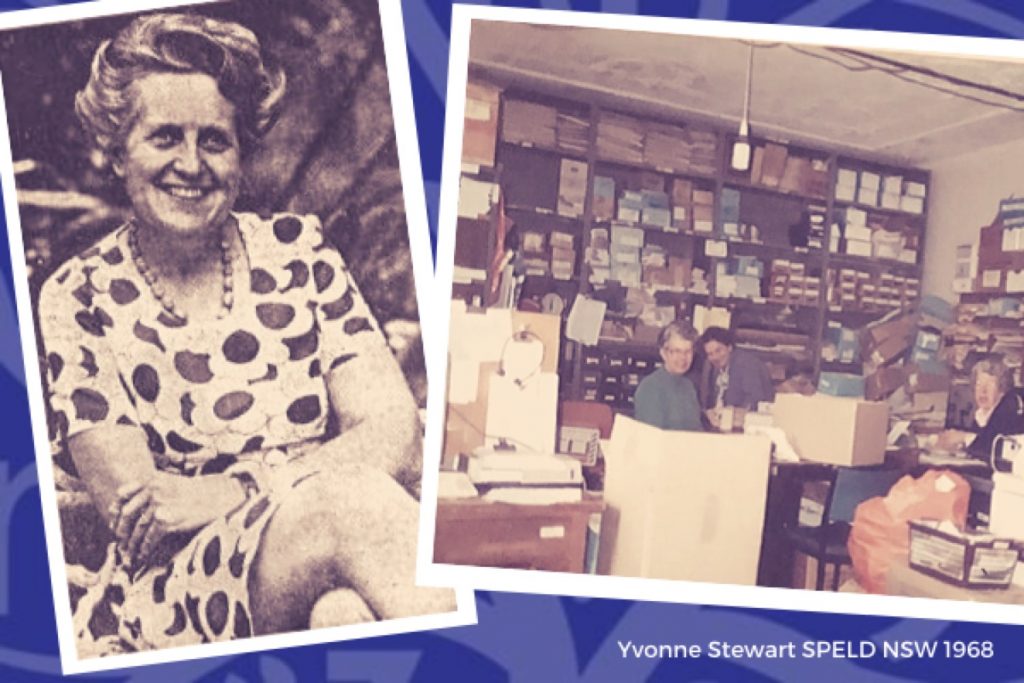 It all started with a tireless volunteer – Mrs Yvonne Stewart, who founded the organisation in 1968 and who played a key part on its management committee until 1996.

Mrs Stewart founded the association after learning about dyslexia, first from her daughter, who had come across it during her work as a speech therapist.

Two distinguished visitors’ to Australia sparked interest in the problems of those children who failed to learn, and in particular failed to learn to read. In1967 Dr MacDonald Critchley visited Sydney and spoke at the Royal North Shore Hospital. He provided initial inspiration to many people in NSW including Yvonne Stewart. As a mother and trained kindergarten teacher, Mrs Stewart said she had been intrigued by the talk and that it had explained some of the puzzling behaviour she had experienced when teaching young children to read.

“Everybody went home from the talk feeling like they had to do something” she said.  “I came back here [Mosman home and then the SPELD NSW office for 22 years] and decided to call a meeting downstairs”.  The meeting was attended by 50 people. [I have been told by her grandson, Toby Heap, that the area was big enough for a ballroom]The first public meeting was held at the Child Care Centre within the Royal North Shore Hospital. More than 300 people tried to crowd into a room that would have comfortably held 100. Dr. Clair Isbister, a former VP, spoke at that meeting, and members of the Management Committee who attended that meeting were Dr. W. Fisher, Mrs O. Wright, Mrs. D. Macpherson, Mr and Mrs A. Stewart and Mr W. Kennedy.

On 29 October, 1968 the first AGM was held. Dr. W. Fisher, VP, explained in general terms the plans envisaged in the future progress of SPELD. He referred to an estimated 25,000 children in NSW in need of help, the obvious need for more training courses for teachers, the aim of SPELD to do whatever it can to see that such additional training facilities are provided, the need for a membership drive, and the need to seek the support of other organisations in distributing information approved by a proposed advisory panel of professional.

How did Yvonne Stewart answer the 5000 letters from parents?

Yvonne Byers tells – I started at SPELD in the late 1960’s – Yvonne was coping with the correspondence on her own, she had devised an incredible method of “word processing” to reply to the letters. She had a book in which she had written many, many different sentences and had numbered them. For example, No 1 might have been “have you discussed your child’s problem with his/her teacher”. No 2 – “would you like to have your child assessed” and then she would read a letter from a parent and write a code across the bottom – 1,7,29, 54 etc. Volunteers would refer to her book and could type off a reply without Yvonne having to dictate it.

At this time SPELD’s office was on the sun verandah upstairs in Yvonne’s home.

Jane Parmentier tells how the office grew: The office grew from a typewriter and a filing cabinet to various tables, desks and a monstrosity of a duplicating machine and a hand operated metal addressograph with small pre-embossed metal plates which we fed tediously through the machine by hand addressing the envelopes. There was a small drawer containing names of remedial teachers, and a larger drawer to which Yvonne would point proudly and say “and there are the politicians!”

We then progressed to electric typewriters, more desks, telephones, tables and shelves and always more books for sale and for expanding the library, and of course Christmas cards. Then computers took over. Space was a problem but never insurmountable. Visitors to the scene reacted in various ways. One just said ‘wow!’ another compared it to the French underground.

The Counsellor’s workspace wedged between the deep freeze and the fridge and the kitchen sink. Yvonne had a wonderful capacity to choose the right person for the job and SPELD has had a succession of devoted, compassionate and professional counsellors who have been a lifeline for innumerable parents over the years, as well as support students, and adults with learning difficulties.

How did we get our name?

At the 4 August 1970 AGM – Miss Hyde had suggested “SPELD “ as an abbreviation of the term “SPEcific Learning Difficulties”, a suggestion which had met with spontaneous approval and which has since been accepted as the short title of at least seven Australian State and Territory Associations.  It is appropriate and perhaps symbolic, in the circumstances to use a term that is misspelt, a feature that often draws attention to it and provokes comment.

SPELDs were also established in each state and territory.  In 1970, these various SPELD Associations decided that they should have a national body. The main purpose of this national body would be to keep contact with the Commonwealth Government and to speak with one voice to Commonwealth politicians. AUSPELD, which is used as an abbreviation for the Australian Federation of SPELD Associations, has functioned in this capacity with a fair degree of success.  The first President of AUSPELD was the late Dr Denby Bowdler. In 1972, the first national conference was arranged by AUSPELD and held in Canberra on 3 May, 1972.

Behind every great woman

Allan Stewart, more commonly known as Dutchie, was one of the driving forces with the SPELD Association from its inception.  His expert guidance helped in setting up a constitution which was adopted in 1968 and formed the basis for constitutions for the other SPELD Associations. For over twenty years he gave his time and his valuable experience to the efforts of SPELD not only to lobby politicians, but also to obtain financial support for the Association from the NSW Government.

His great wish was that SPELD would finally become redundant as resources with the schools and in the community became adequate to meet the needs of those with learning problems.

Today, we continue that valuable work.

Big thanks go to all our Members, Committee, Staff and Volunteers past and present who have all helped SPELD NSW remain useful and relevant for our community.

If you have any stories about the work of SPELD NSW over the last 50 years please get in touch, we would love to hear from you!

We are very excited that SPELD NSW is reaching out to regional areas of NSW in 2023, starting with a 3 day visit to Wagga Wagga in February to deliver our highly engaging professional learning courses.

SPELD NSW Bookstore, Office and InfoLine will be closed from 20th December and will reopen Wednesday 11th January 2023.

The professional learning team at SPELD NSW has been busy creating a suite of new reading courses that are launching in 2023!

Teaching Reading in the Early Years- a step forward in planning

Many school communities are excited by the new path that the NSW K-2 English syllabus is taking and they are ready to jump in feet first into evidence-based reading instruction. Armed with the understanding that a systematic and explicit approach to reading instruction is the most effective in reaching all learners, many schools are now seeking to understand what that might mean in their context.

Teaching Reading in the Early Years- Why did nobody tell me that!?

At SPELD NSW we have the great privilege of working with teachers at various stages in their careers. In a lot of our Professional Learning and school-consulting work we hear the exasperated catch-cry ‘Why didn’t anyone ever teach me that?!’.

Book an educational assessment with a SPELD NSW Psychologist